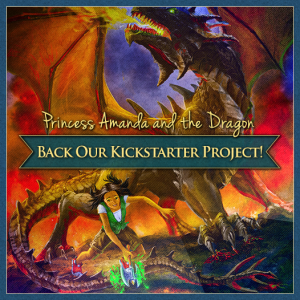 One of the amazing adventures of the Tales of the Kingdom crowd-funding Kickstarter Campaign was the contest that our son Randall Mains’ Pathmaker Marketing Group ran, searching for an artist to re-do the illustrations of the three books of this children’s trilogy.  The Web site, 99 Designs, offers opportunities for artists from all around the world to compete for places to design logos and marketing ventures or, as in our case, illustrate whole books.

When the participating artists who were given the pdf file of one of the stories from the first book of the trilogy, Tales of the Kingdom, climbed to 87 participants (with eventually, some 300 submitted illustrations) David and I were hauled onto the team just to help with the intensive decisions and interaction with artists from a variety of countries.

The first story sent to them was “Princess Amanda and the Dragon”.  The process goes like this:  The artists are e-mailed the story—remember that most are reading the English narrative as a second or third language—a sketch is submitted, the panel makes suggestions and comments, another more completed illustration is sent back, final comments are made, then the artist sends a final submission.

Many aspects were judged.  Was the artist’s English facility high enough for us to communicate clearly with one another?  Could the illustrator turn in work on time? (We are needing to receive 36 illustrations by September in order to go to book design, make revisions to the copy, flow the content into the design, choose a cover, design a cover and have copies ready for Christmas mailings!  Remember—we are re-doing three books.)  Were the artists’ attitudes collaborative and cooperative or did they display an unwillingness to be directed?  Were the illustrations appropriate for a children’s reading audience or were they more young adult art?

We received so many superb illustrations that we agonized over our choices.  There were next to no submissions that we cancelled because of poor quality of workmanship.

In fact, we had so many gorgeous artistic renderings that we purchased 12 of the “Amanda Slaying the Dragon” entries and will offer a calendar for 2015 as part of the Kickstarter Backer Campaign.

You can see the winning artwork plus the calendar artwork (with a few quotes from the story).  Eventually, each 2015 month will have its own quote from the book. Go to https://www.kickstarter.com/projects/kingdomtalestrilogy/the-kingdom-tales-3-illustrated-storybooks-that-ki back our project, and choose this beautiful calendar as an add-on.  In Kickstarter lingo, you will become a Backer, but you are really pre-ordering products so that we will have the money to buy the art and pay for the publishing process. 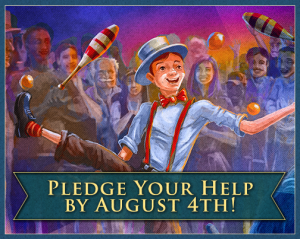 Against the urgings of three doctors—my general physician, the ear and nose and throat specialist, and for a second opinion, an endocrinologist (chosen because he believes his profession is too eager to perform thyroidectomies)—I delayed my thyroid cancer surgery for several pressing reasons.

After our son Jeremy’s death from lymphoma, I discovered that I was not healthy in a variety of ways; for one, years of living with publishing and broadcasting and travel deadlines—not to mention a long and gruesome journey for our family into a losing battle with a rare form of lymphoma—my adrenals kind of got stuck on the fright and flight button leaving me doing life at a kind of constant “warp” speed.

There was a family business crisis that demanded the full attention of David and myself.  We were required to spend countless hours each day in phone consultations, and cumulatively we dedicated some twenty days to bring our gifts and understanding to help avert disastrous outcomes.

But mostly, our son, Randall Mains and his Pathmaker Marketing Group, were studying the science of crowd funding and had taken the better part of three months to design a Kickstarter Campaign to revise, re-illustrate and redesign our prize-winning children’s trilogy, Tales of the Kingdom, Tales of the Resistance and Tales of the Restoration that David and I had started writing some thirty years ago.

It’s amazing what a cancer diagnosis will do to force you to think about which legacy projects you want to leave behind.

These books, although highly thought of and generously reviewed (check them out on Amazon.com), have sort of languished in the hinterlands of religious publishing.  Out of print/ back in print/sub-rights granted helter skelter.  Finally, the publishing rights (those legal permissions authors grant to publishers) reverted to us, and we all felt it was time to give these books, which some have compared to Bunyan’s Pilgrim’s Progress, and some to C. S. Lewis’s Narnia series, appropriate attention.  If anything I have done in a lifetime of writing deserves my intensive focus now that I am 71, these three books (written for children of all ages) are certainly the legacy I want to leave behind.

Probably the delay on a cancer operation (I canceled it twice) was motivated by the thinking:  I’ve fought for the life of one son and lost.  I need to fight for the lives of these literary children and give them a chance to dance forward into the future—even when I am no longer around.

So the work has been done, revisions have been chosen, an artist has won a contest, the contract has been written for him to re-do some 36 illustrations, a video has been shot and edited, the project has been submitted to the Kickstarter panel, the word has come that The Kingdom Tales campaign has been approved and we launched on-line last week.

I made an appointment and saw the ENT physician last Thursday and a thyroidectomy has been scheduled for Monday, July 14.

I am healthier than I have been for some time.  A business collapse has been averted.  These well-loved but woefully under-marketed stories that deal with conflict and terror and delight are being redesigned and re-illustrated for another generation of readers.

Will you help us?  Think beautiful Christmas gifts.  Think stories that emphasize moral virtues and character development.  Think about a King who is the most beautiful of men.  Our goal is $20,400 but we would like to earn much, much more.  If we don’t reach our goal, we won’t receive any of the financial pledges for pre-orders.  Do me a favor, won’t you, and check out our page on Kickstarter.  I would love to reach our goal by the time of my cancer operation on July 14.  (The campaign ends August 5.)

The artist in us all can be sidetracked, but it can never be eliminated.  That’s a fact that Zoltan Tobias, of Szeged, Hungary will readily attest to.  Though currently a university student who is about to become a medical doctor, Tobias still pursues his love for art.

“When I was ten years old,’ Tobias explained, “I saw an extremely inspirational movie about a young child who was drawing comics.  And,” he added with a big smile in his voice, “I discovered that I could do the same thing.”

Like so many artists around the world, Tobias is self-taught.  He prefers digital art, but when dealing with more traditional mediums, he is attracted to markers and ink.  While searching online for digital paint jobs, he came across 99 Designs.  He followed through with signing up because he realized it presented him with a number of promising projects, opportunities to improve himself, and good financial offers.

“I think I was probably attracted to the Tales of the Kingdom project because I have been fascinated by dragons since I was a child, making this an obvious choice for me.”

This particular project did prove to be a challenge for Tobias, especially creating Amanda.  While most of his projects are completed in four to five hours, this one took closer to eight, due to the fact that he made several changes to the piece as he received feedback about the art he was producing.

When you Back Our KICKSTARTER Project you’ll RECEIVE 3 Award-winning CHILDREN’S BOOKS to READ & ENJOY WITH YOUR KIDS (or GRANDKIDS) — each story teaches character lessons for life, and comes fully Revised, Re-published in print and all eBook formats, and Re-illustrated with Captivating, Original Art!

If you would like to get the Wall Calendar and/or back our Kickstarter Campaign to revise, re-illustrate and re-publish the Kingdom Tales Trilogy, go here:

We have the first two Backers for the Kickstarter Campaign to revise, re-illustrate and republish the Tales of the Kingdom Trilogy, which David and I began writing some thirty years ago! These Backers have come in at the $157 and $300 levels, which insures (if we meet our goal of raising $22,500) that they will receive the exclusive, limited edition Kickstarter hardcover Trilogy—all three books—with their names printed in the books, and personalized autographs to the recipients of your choice.

These particular editions will only be available for a limited time in a limited quantity through this Kickstarter Campaign. Our goal is to mail them to your door in time for Christmas giving. For those of you who have loved these books through the years, this is a wonderful legacy project to give to family and friends. Thank you first donors! You have kicked off the campaign! For more details, visit https://www.kickstarter.com/projects/kingdomtalestrilogy/the-kingdom-tales-3-illustrated-storybooks-that-ki

Reviews of My Books Online:

Goodreads Reviews for
Tales of the Kingdom

Goodreads reviews for
Tales of the Resistance

Goodreads reviews for
Tales of the Restoration

Links to My Books

Links to My Websites